Lawrence’s dancing career stared at the age of 5 and at 14 he became UK Latin champion and British team captain, which lead him in later years to be world amateur Latin finalist in the Italian and Paris open. Following a successful competitive career, Lawrence went into teaching and passed his associate examination attaining 99% in both the practical and theoretical Sections.

He broadened his horizons by switching forms and attained a first class degree in contemporary dance at AUB university. This paved the way for an apprenticeship with the Jasmin Vardimon company where he worked and performed in her company’s U.K tour of “Tomorrow”.

Lawrence spent 4 months in 2016 on set, working and dancing in the ITV production “The halcyon” which premiered in January 2017. As well as this he also danced/performed in the cinematic production of “Far from the Madding Crowd” which premiered in cinemas on April 2015. Most recently Lawrence has worked employed by choreographer “Paul Harris” as a lead dancer in the Netflix original ‘Thanks for the Memories’. His specialised projects include performing and teaching with step change studios, their company specialise in ballroom and Latin with able and disabled artists. He performed three numbers their at headline show in Sadler’s Wells London and taught a workshop outside the National Theatre on the Thames. (2018 – present).

Day to day, Lawrence is a resident teacher/choreographer at PDSW and Dance Crazy and Euro Tanze Center in Germany, training his students for exam’s, shows, medals and Pro-Am competitions.

Emma started dancing at the age 3, training mainly in Ballet, Tap, Modern, Jazz and Disco Freestyle. At the age of 6 Emma began her Ballroom and Latin career, working her way through the examination system, After a successful competitive career, Emma then went into teaching earning her associate examination. 2010 brought Emma to Mauritius for the ‘Dance Extravaganza” as the headline act. Whilst in Mauritius Emma was lucky enough to be invited to judge the competition and work with the students as a teacher. In 2011 Emma went on tour as a backing dancer for “The heat is on the Musical’

Currently Emma has combined her love of dance and fashion working for DSI London as a Costume Coordinator and Special Projects Manager. Emma has worked with many professional dancers to style there shows such as Strictly’s Pasha Kovalev and Giovanni Pernice, as well as working with spin of shows such as Lets Dance and Dancing with the Stars in Ireland, Costa Rica, Norway, Sweden and France to name a few. As well as working with DSI Emma is also a resident teacher at Dance Crazy in Bournemouth.

Although having been members of the same dance school since the ages of 6 and 8, Lawrence and Emma have only been training together since 2013. In this this time they have been working towards their professional teaching qualifications and have performed many demonstrations for corporate events, dance productions and weddings. Lawrence and Emma were also featured dancers in cinematic production of Agatha Christie’s Crooked House.

The below breaks have tuition available with Lawrence & Emma 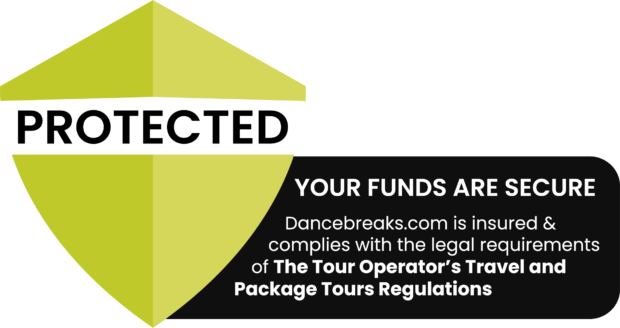